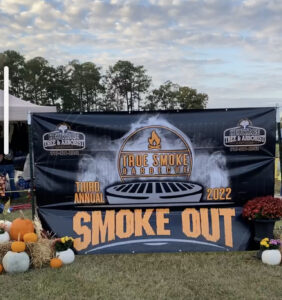 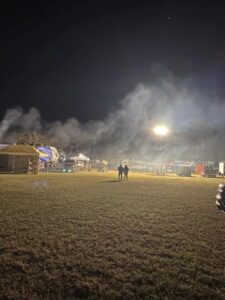 Just as quickly as it came it’s just a memory now. The Third Annual True Smoke Out event has come and gone and whew, what an event it was. Thursday morning at first light I was in my truck and heading on over to the True Smoke grounds at Hatcher Estates for what I knew was going to be an amazing next few days.

The gates opened to the public at noon but in True Smoke fashion we couldn’t keep them back and by 2 pm the main field was filled, and we began parking people in the first overflow lot. Meanwhile, members of the “Steer Cook Team” were putting the final touches on the brand-new AMAZING cooker. This thing is a 7-foot by 7-foot piece of master craftsmanship put on by so many wonderful people with Chris Hatcher and Jeff Parkhurst spearheading the newest addition to the True Smoke family. When I tell you this thing cooked a WHOLE STEER to perfection on its FIRST cook ever you know the best of the best went into this cooker. A pizza competition happened for the first time and Ed Swinson came out the winner with what I can personally attest to (I wasn’t a judge but was lucky enough to get a slice) it was the best pizza I HAVE EVER HAD! Thursday night concluded with a toast of the finest courtesy of John Kearney for everyone involved in the process of the cooker being built from manual labor, donations, materials, and various other reasons a shot of Van Winkle Special Reserve 12 Year gave us the warmth we needed on this crisp evening. If you are wondering what I thought of this $1600 per bottle whiskey I will tell you it lives up to the hype. 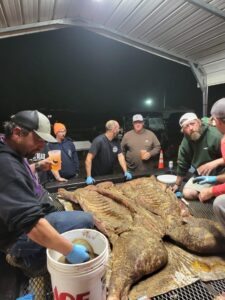 Friday started with Bryan Hanks live on 960 The Bull at True Smoke central for his morning radio show. I was honored to be asked to be on the show and absolutely loved speaking with Mr. Hanks, Tyrone Morgan who is the president of the La Grange Chamber of Commerce, David Watkins aka “The Godfather of True Smoke” and co-founder of True Smoke BBQ, and former major league baseball pitcher, Chris Hatcher. I was definitely low man on the totem pole in that amazing group of guys. William Hardy gave us a breathtaking rendition of the National Anthem to kick the event off officially and the cooks were on it. Whole Hogs were on for the $1000 first place provided by the gracious team of J-3 so the smell in the air was amazing to kick off the morning.

The first competition turn-in was spareribs and I was lucky enough to judge this contest with 21 entries I left feeling fat and happy. A short time later the wild game competition was on and again your truly got to judge all I can say is WOW we had some great tasting creative food. Not too long after it was time for the pork butt turn-in and again what an amazing bunch of entries. The night was made extra special by an intimate homecoming meal due to the weather taking a turn for the worse, Heavy wind and rain began mid-way through the day and made things a little difficult at times, but True Smokers know how to come together, and we provided this tradition around the cooking steer. How fitting I would say.

The weather came in like a tropical storm Friday night and into Saturday morning leaving a few attendees to pick up the remains of a few collapsed tents and wet items. Without hesitation, dozens of members began helping those in need dry their stuff off or carry things and load them into vehicles. Some members helping knew each other and others didn’t but without a second thought everyone who could lend a hand at that time was and the true meaning of this wonderful page we all love so much shined at its brightest. I find it no coincidence that shortly after the clouds broke and the sun came out. The comps rolled in early, and Shore Smoke sponsored the kid’s contest, and let me tell you this……… True Smoke is in good hands for the future because those turn-ins were better than most adults who turned in. Without a break, we jumped into the appetizer contest sponsored by Ed Swinson of Ed’s Shape Shack.

This contest brought smiles to all the judge’s faces and after another 21-entry field, I was stuffed. I subbed out on the final contest for judging and David Watkins, and I swapped roles and I got to be table captain for this round. I didn’t taste any of the drinks, but boy did they look delicious. The kids’ contest, as well as the campsite contest for best decorated, were next and were the final events of the day. The place was decorated with such a Halloween feel and the kids all looked adorable. Fred Rouse was in the house rocking the tunes all day for everyone Saturday as well.

Awards kicked off and without a doubt, this is my favorite part of the events every time. Seeing the happiness in people’s eyes, the excited screeches, the high fives, hugs, and genuine thrill for one another’s victories is a sight I wish everyone could witness. Taylor Best of R.D. Jones got to spit his auctioneering skills as several things were donated and put toward the Spring Fling which if you haven’t heard Shore Smoke Seasonings is going to be running next year. Stay tuned for more updates on that coming soon. Following the awards, we finally had the opportunity to see the whole steer come off the cooker and make its way to the tables for everyone to eat for the big feast. I’ll tell you this, Shore Smoke Seasoning special rub was requested for this steer, and it was delivered because the flavor was outstanding not to mention perfectly cooked so kudos to all involved.

After that, it was loading up the truck and back on the road to Delaware. Drove through the night and made it home around 230am and said to myself “Let’s get this Spring Fling planning going because it’s going to be one time you won’t want to miss. The next few days after are always amazing as well because seeing all the photos and videos uploaded to the page by all who attended gives you a moment to relive some of the greatest memories any of us will make. Another event is down, and another countdown calendar begins for the Spring Fling. 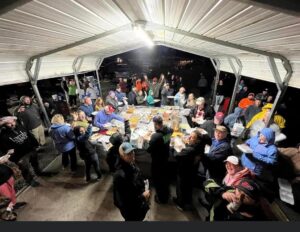